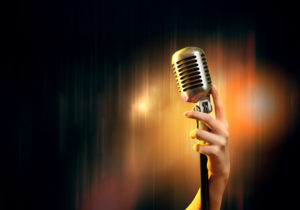 I borrowed the first part of this blog from my wonderful daughter who had the insight to pick up on this idea and respond way before I did!

Saturday night TV has recently taken a strong hike in content quality. I’m talking about The Voice. If you haven’t seen The Voice, it’s another one of those ‘let’s dredge out all the vocal talent from the UK with a few heart warming emotional stories thrown in for good measure’ type TV shows, but is actually quite good. The flip with it is that in their first audition on stage, the judges can’t see the contestants. They judge ‘blind’, all they have to go on in responding to the audition is the voice of the contestant.

Apart from some of the drama this brings to the show, it’s also really interesting to hear how the judges are listening to the contestants. There’s a real level of integrity in their judging because it really is all about their voice! However, just this past week one comment really struck me. Jesse J told an unsuccessful contestant ‘I just didn’t believe you! Without seeing the vocalist, she could hear that there wasn’t enough belief and confidence in the song to offer her a place on her team. She was listening for an integrity in the vocalist she couldn’t hear. Jessie J was listening for an authenticity, a congruence, a real connection between the lyrics and feeling of the song and the performance of the singer. The contestant, for Jessie J, was lacking something. For me she did not own what she was singing.

Isn’t that so true in business also. The people who inspire us, who we would follow because of who they are, have that intangible aspect of inner character.

Jim Collins, the author of ‘Good the Great’ writes ‘Leadership is much less about what you do, and much more about who you are. If you view leadership as a bag of manipulative tricks or charismatic behaviours to advance your own personal interests, then people have every right to be cynical. But if your leadership flows first and foremost from inner character and integrity of ambition, then you can justly ask people to lend themselves to your organisation and its mission.’

Where we as leaders stumble is when there is a disconnect between what we say and how we behave. We need to do more that just say the words and then believe we have communicated. The people that have inspired me over the years have put themselves into what they are saying and doing and behave in a way that convinces me that it matters to them.

One of the most inspirational speeches I have recently re-discovered,  is from Charlie Chaplin in his famous parody film ‘The Great Dictator’ in 1940.

The speech is profound, even more so because he is famous as a silent movie star and it is the first time he used his voice. The context to the speech, which I discovered in further research nails it for me. I encourage you also to look beyond the speech.

Chaplin embodied integrity and authenticity. What a voice!

I found this article from Tom Stevens recently which, combined one of my favourite childhood films with my passion for leadership development. It captured many of the ideas and challenges…