People keep asking me what I enjoyed the most about my holiday in Barcelona last week… and the experience that will stick in my mind most from this holiday happened on the afternoon of the last day. I’d set my towel up on the beach, got my book ready, applied the sun screen and went to dip my toes in the water before settling into an afternoon of pure relaxation. Unfortunately, I’d parked my towel in front of the water where the beach drops off dramatically so after only a few steps into the crystal clear blue waters I was stood on the edge of a sharp drop where the waves break and roll. Not ideal for a quick dip whilst still being in sight of my things! 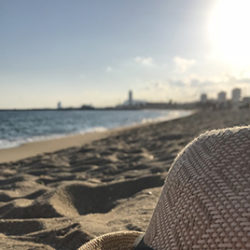 While I was contemplating all this, I became aware of movement in the water, fast movement! A shoal of garfish was swimming at speed towards the beach. The scene was frantic and I soon realised they were racing to escape a much bigger predator fish that was darting left & right trying to catch one of them. After a moment, my brain registered what I was seeing and somewhere inside I connected with a fear and desperation what that frantic swim for self-preservation would feel like. I heard myself say out loud “go on little guys, you can do it, escape that fish!” But they were coming faster and more frantic… and straight for me! So desperate were they to escape they hurled themselves at the beach around my feet where they lay flapping and trying to wriggle themselves back towards the sea. A wave came and scooped a few up, and then another, but it was obvious that some of these little dudes weren’t going to make it back into the water despite the odd wave, and, as if they knew, they stopped trying and lay there, on their sides, one eye looking up at me, with what looked like a long thin mouth that could inflict some damage if you got too close….

Cautiously to begin with, I started picking the beautiful shiny thin fish up and releasing them into the water where they swam off, no doubt happy to be back in their natural habitat, in the water where they could breathe and swim and do whatever it is that garfish do on a sunny afternoon in the Mediterranean, but also back to where they might run into that predator again or another one.

My time in Barcelona was like a study or contemplation on stepping outside of my comfort zone. Holidaying solo, taking an unfamiliar transport system, attempting a different language, finding and exploring different sights, finding somewhere to go for dinner and once I’d got used to the location, the area, where to go for dinner, the next day choosing new places instead of that becoming the new comfort zone. As days passed the process of choosing something different and unknown became easier and easier, and with every new choice my decision was rewarded with something exciting, fulfilling or rewarding.

Not so very long ago I had come to the end of myself, working out of preference and at stretch for a number of years, in an environment I found challenged both my ability and my values. Looking back, like one of those fish I had launched myself at the beach, where I’d be safe. I guess for a short time I was, safe from the turbulent waters, out of danger and able to recover, recoup and reassess. As the waves lapped up the beach I couldn’t catch any, I stayed where I was, occasionally getting a taste of freedom with each wave, but never venturing back into the deep. But like those fish, the beach isn’t where I can thrive, I can’t breathe or swim or do whatever it is I’m meant to be doing while I’m hanging out in the comfort zone. And yes, out in the crystal blue sea it’s not all easy and it won’t be free of danger but it will be living…

I’m privileged to work where our purpose as an organisation is to help skilled, talented and experienced leaders get back in the game, out of the shallows or to swim even better…. And be part of their journey to fulfilling their potential.

So what’s your beach?

A.I. and the Fourth Revolution: Opportunity or Redundancy?

In June this year Oxford University was given £150m by an American billionaire to investigate the ethical implications of A.I. (Artificial Intelligence). Stephen Schwarzman, co-founder of Blackstone, a private equity group,…